In November of 2016, Wheat Ridge voters approved a ½ cent increase in the City’s sales tax rate in order to fund investments that will improve transportation infrastructure, create opportunities for economic development, and enable additional “place-making” to attract those wanting to live in Wheat Ridge.  The new sales tax rate went into effect January 1, 2017 and is planned for a 12-year period.

The Wheat Ridge · Ward Station area will receive $12 million from the sales tax increase, with which the City will address traffic growth and facilitate redevelopment and economic development opportunities in the area surrounding the G Line commuter rail station at 52nd Avenue and Ward Road. The improvements may include:

In March and April 2019, the City met with property owners and tenants affected by and adjacent to the proposed bridge and trail locations.  In April 2019, City Council gave direction to move forward, and a consultant team is advancing a design to build a bridge over the railroad tracks and extend a multi-use trail connecting the station area to the I-70 Frontage Road.  FAQs and more project information are provided below.

Another round of meetings with property owners and tenants will be schedule for later this year. Conceptual designs are provided below as they were presented in March/April 2019. These images are preliminary in nature and the design may evolve and the project moves forward.  The design of this project was put on hold in 2020 for a variety of reasons including a need to shift staff and financial resources to other capital improvement projects.  In early 2021, City Council gave direction to reengage the design consultant.  A more detailed schedule will be posted when it become available.

In late summer 2018, the City started designing improvements for portions of W. 52nd Avenue, Tabor Street, and Ridge Road.  The scope of work includes the following: 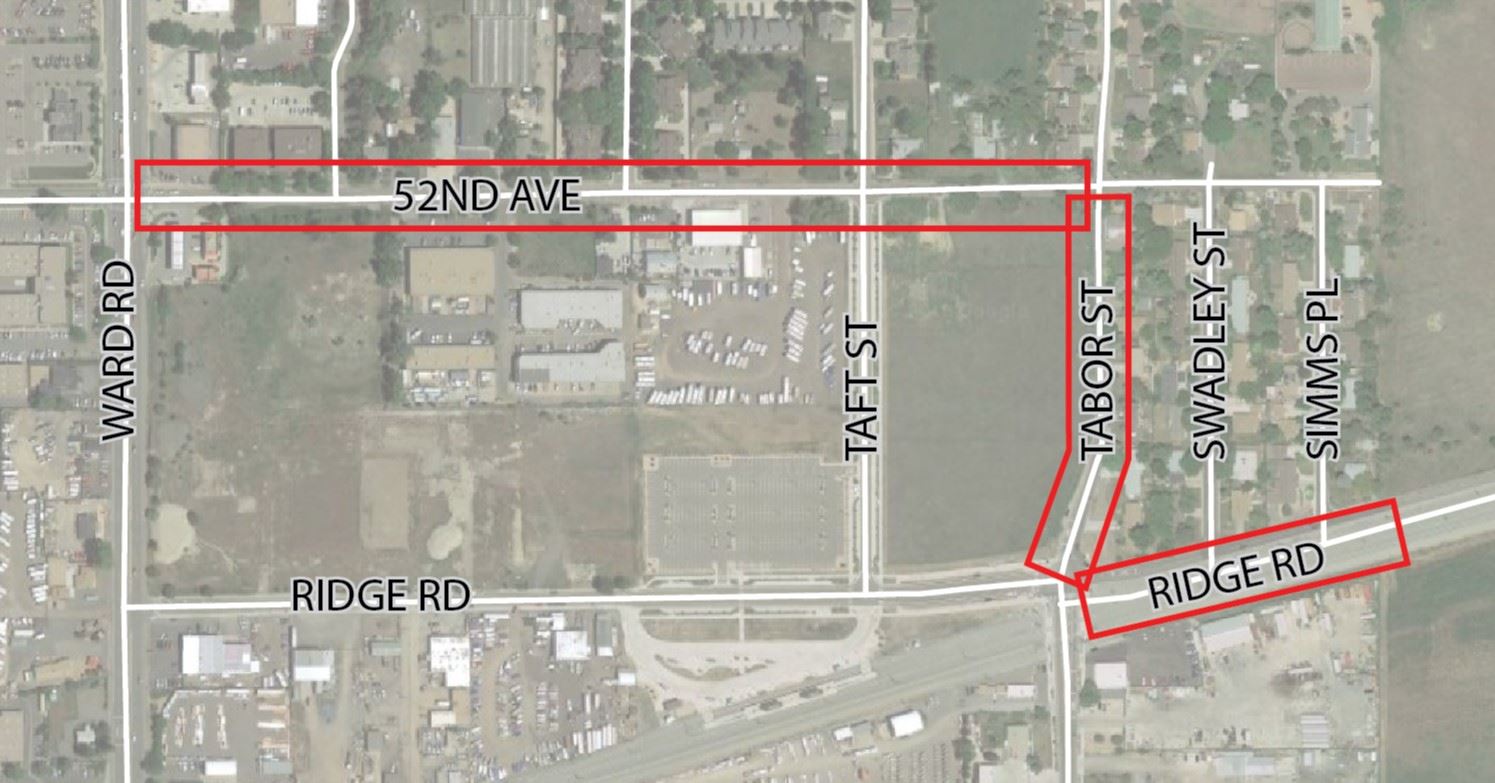 A series of small group meetings took place in mid-January 2019 with property owners and tenants who are immediately adjacent to the roadway segments, and a neighborhood open house took place in early February 2019.

As of August 2019, right-of-way acquisition was underway for the five (5) affected properties, and design documents were being finalized. Utility conflicts and agency coordination continued from 2019 into 2020.  In 2020, some utility work was completed, including relocation of utility poles.  The project was put on hold in 2020 for a variety of reasons including a need to shift staff and financial resources to other capital improvement projects.  In early 2021, City Council gave direction to reengage the design consultant to finalize designs and construction documents.  A more detailed construction schedule will be available in summer 2021.

For more information on the road reconstruction, refer to these documents:

For more information on planning efforts in the area or the G Line, refer to these pages: